After every SSL round FloorballToday looks back at the matches played. Make sure to visit FloorballToday regularly to stay up-to-date about the most prestigious league in the world.

Falun showed domination versus losing finalists Linköping. After just 59 seconds of play Falun opened the score which was doubled at 9.49 when Galante Carlström found the net in a powerplay situation. Just 15 seconds later the lead was already 3-0 through a volley by Simon Cederström. Linköping’s answer came in another powerplay  – this time for the home team. The second period started with a fast shot from – who else – Alexander Galante Carlström near the end of a Falun powerplay. Now the score was 1-4 and that even became 1-5 when Falun scored a shorthanded goal after an incredible action by Rasmus Enström assisting Johannes Larsson. Even though less than half of the match was played, the gap proved already too big for the home team as they struggled to cope with the Falun offense. Despite a 2-5 in the second period and a powerplay goal in the last, the team from Linköping couldn’t get a grip on the game. Falun was stronger tonight.

With 4 goals to catch up a desperate Helsingborg took a timeout and decided to take out their goalkeeper with 6 minutes left, a smart move which gave result. With almost 100% ball possession, Helsingborg … [read the complete match report]

What else could be expected than a tight game. Dalen quickly opened the score and gained a lead of 3 points thanks to two very effective free balls and a skilled backhand volley. In a quick counter by team captain Gillek the farmers from Mulljsö lessened the goal gap. In the second period Dalen scored the 1-4 in a powerplay situation but was soon turned into 2-4 by Norwegian defender Gidske. David Gillek proved to be in form after he dragged a ball in yet another powerplay making the score 3-4 just before the end of the 2nd period. Dalen’s free balls were very efficient. After scoring 2 goals in the first period, the 3-5 came also from a free ball situation by the stick of Albin Andersson. After 9 minutes in the third period the 3-6 came when Jonas Svahn calmly finished a 1 vs 0 situation. A sloppy mistake by Dalen gave hope just 20 seconds later when it was capitalized on by the Mullsjö forwards. Mullsjö came to score yet again by David Gillek, but despite the great efforts of the team captain, he had to see his team lose with 5-6. 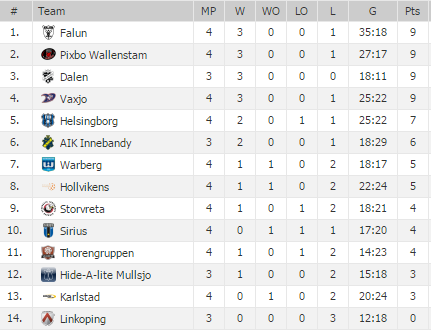 With the beginning of September, the floorball season starts not only in the Czech Republic but also in other European countries. It is also the best time to think about a preliminary tournament before its second half… A tournament where players could measure the strengths with domestic and foreign rivals, reinforced the team spirit, gained […]

Imagine you organize your own floorball tournament and upload a sleek highlights video. Next thing you know, your video goes viral and more than 5 million people worldwide have watched it. The dream of many but the reality to Alexander Backlund of the Håsjösåpan soap floorball tournament. For those who haven’t watched the viral video yet. […]

Leave a comment Cancel
Comments to: Conclusion SSL Round 4: Falun in the lead – Dalen still has won all their games
Cancel reply
Support us and receive access to all our content!

Appreciate what we do? Consider a one-time donation

In this article you will find many floorball goalkeeper tips to bring your level to the next game. Whether you are a beginning floorball goalie, an experienced goalkeeper, or even a field player, there is much to learn from this article! In the previous part, I covered the basic posture in the goalie area, the […]
Written by Daniël Nicolai June 15, 2020June 15, 2020

Energy, Work & Power – How physics in hockey can help you with your SLAPSHOT | PRO

When executed well, the slapshot is the fastest shot in floorball. Where do the speed and power come from? That’s what I’m gonna dive into today, helped by ice hockey and… physics! Fact: in 2011, the record for the hardest ice hockey shot was broken: Denis Kulyash (Russia) managed to shoot with a speed of […]
Written by Daniël Nicolai June 1, 2020June 2, 2020

The goalkeeper is perhaps the most important and special player of a floorball team. Without him or her, you can’t even start the game. It’s their job to keep your goal empty and their incredible saves are what prevents your opponents from running you over. In this article I am going to talk about Goalkeeping […]
Written by Daniël Nicolai May 21, 2020May 21, 2020