These were the biggest attractions of the first round in Czech Floorball Superliga. Make sure to visit FloorballToday regularly to stay up-to-date about the most prestigious leagues in the world.

What would have been the most special match in Czech floorball history unfortunately turned into a disaster. In the tennis stadium Štvanice the women’s Superliga match started first and was won by Bohemians with 7-6 after a dramatic overtime goal in front of 660 spectators. Now fans were waiting for the next match between the men teams. Unfortunately, there was a bad weather forecast in Prague for the whole weekend which was the main cause of the low attendance. To make things worse, the game was canceled in the 38th minute due to a storm when Chodov was leading 5-2.

The fourth match in history of the club from Pardubice in the multi-functional arena with a capacity of 10.200 spectators. The opponent of the home team was 16 times Czech champion from Prague, Tatran Střešovice. After the 1st period the home team led by 3-2 and did well. The second period was not worse: both teams scored twice which made the score 5-4. However, the 42nd and 43rd minute of the game turned disastrous for the home team when Tatran scored two quick goals. The match culminated in the last two minutes. First Pardubice tied to 6-6, but 58 seconds before the period horn sounded Tatran scored the winning goal. Was there really nothing positive for the home team Pardubice? Yes, there was! The 2.112 spectators that came to the match made the new Czech record of most spectators in a regular season match!

The third match of our report was a chance for Sparta Prague for revenge on the Bulldogs from Brno. In the fourth minute the score was opened to 1-1 after two quick goals on both sides. The period ended with 2-2. The second period turned out to be the key period of the match ending in a 4-2 lead for the guests. Two minutes before the end of the game Brno had an uncomfortable lead of only one point (5-4) and Sparta started the powerplay. Brno scored twice, however, and won 7-4. That means next won match in this series for Brno and Sparta must wait for a next chance. 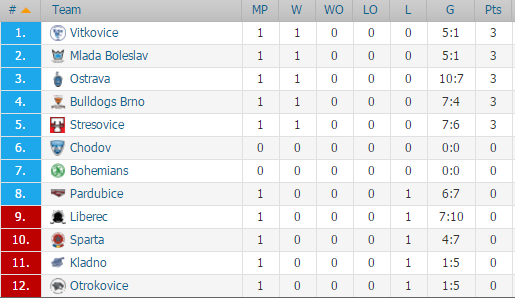 Next story :Highlights: Thursday Helsingborg will play Linköping - memories from the '14-'15 semifinals

Leave a comment Cancel
Comments to: Conclusion Czech Superliga Round 1: New records, canceled games and failed revenge
Cancel reply
Support us and receive access to all our content!

Appreciate what we do? Consider a one-time donation

In this article you will find many floorball goalkeeper tips to bring your level to the next game. Whether you are a beginning floorball goalie, an experienced goalkeeper, or even a field player, there is much to learn from this article! In the previous part, I covered the basic posture in the goalie area, the […]
Written by Daniël Nicolai June 15, 2020June 15, 2020

Energy, Work & Power – How physics in hockey can help you with your SLAPSHOT | PRO

When executed well, the slapshot is the fastest shot in floorball. Where do the speed and power come from? That’s what I’m gonna dive into today, helped by ice hockey and… physics! Fact: in 2011, the record for the hardest ice hockey shot was broken: Denis Kulyash (Russia) managed to shoot with a speed of […]
Written by Daniël Nicolai June 1, 2020June 2, 2020

The goalkeeper is perhaps the most important and special player of a floorball team. Without him or her, you can’t even start the game. It’s their job to keep your goal empty and their incredible saves are what prevents your opponents from running you over. In this article I am going to talk about Goalkeeping […]
Written by Daniël Nicolai May 21, 2020May 21, 2020